Gals, I have just the thing to turn the simple act of baking cookies into an opportunity
to teach your children just how sinful and wretched they are in God's eyes!
-- Betty

Have your domestic help (preferably one that speaks some form of English) preheat your
custom-made stainless professional-quality oven to 300 degrees. (If you don't have help, get some.)

Place pecans in zipper baggie and let children beat them with the wooden spoon, screaming foul
words of derision, to break pecans into small pieces. Explain that after Jesus was arrested, and
before the Jews killed him, Roman soldiers beat Him just like they are beating those helpless pecans.
Read John 19:1-3.

Put 1 teaspoon of vinegar into mixing bowl.  Let each child smell the inexpensive vinegar.
Explain that when Jesus was thirsty on the cross he was given vinegar to drink.
If they dare to ask,  "Well, why didn't he just turn it into a nice chardonnay?" fill a tumbler with
vinegar and say,  "Here's your chardonnay, you little smart aleck!"  If they complain, ask them,
"Do you as a sinful little nobody deserve better than Jesus?"
Read John 19:28-30.

Add egg whites to vinegar.  Tell the children that white was the color of Jesus’ skin -- and
generally the best color to be (unless you are Mrs. Bowers’ shoes) when passing a police car.

Explain that the meringue symbolizes the soft fluffy clouds in heaven that your children, as
wretched sinners, have little chance of ever actually seeing.
Read John 10:10-11.

Sprinkle a little salt into each child's hand. Make them eat it and brush the rest into the bowl.
Explain that this represents the salty tears shed by Jesus' followers, and the bitterness of the
children's disgusting sins. Remind them just how impure they are and how undeserving they are
of His love - or your cookies!
Read Luke 23:27.

So far, the ingredients have not been very appetizing and the children may be feeling rather queasy.
Add 1 cup sugar. Explain that the sweetest part of the story is that God loves us so much that He
killed Himself for us. Don't let them ask a lot of follow-up questions as, frankly, this all gets a little
hard to explain -- just brandish the vinegar if things get tricky.
Read Ps. 34:8 and John 3:16.

Beat with a mixer on high speed and fold in broken nuts. Drop by teaspoons onto wax paper covered
cookie sheet. Explain that each mound represents the rocky tomb where Jesus' body was laid.
Remind them that if Jesus was buried in a hole, they as vile sinners deserve to be thrown out into
the road to be pecked to death by crows and run over by Minivans.
Read Matt. 27:57-60.

Put the cookie sheet in the oven, close the door and turn the oven OFF.
Give each child a piece of tape and seal the oven door. Explain that Jesus's tomb was sealed,
cutting off His last bit of oxygen so that He would have quickly suffocated.
Like the Jews, they, too are now responsible for killing Jesus.
Read Matt. 27:65-66.

Send your children to bed, telling them that they will be sad to be without their cookies,
just as a handful of people in the Bible seemed to be somewhat gloomy over being without Jesus
– until they ran off and did other things.

After about an hour, uncork a lovely unassuming wine and open the oven.
The cookies are wonderful with a flinty Chablis.  You won't stop until you've eaten them all!
Glory.

When your children come downstairs in the morning, they will discover that they oven door has
been ripped open and all the cookies have disappeared.  Remind them that this is exactly what
happened when Jesus' followers returned to the tomb and found Him gone – only, after three days,
that tomb probably didn't smell nearly as fragrant as your oven!

If your children cry because they didn't get any cookies, remind them that they are worthless sinners
who deserve to be tortured in Hell and since their sins killed Jesus, they don't deserve treats!
Read Matt. 28:1-9

Your children have just learned a valuable lesson in how the Bible teaches us that humans are disgusting,
worthless sinners who provoke our God into performing wildly dramatic gestures (like killing Himself!)
just to make up for our wretchedness.

What Would Betty Do:
How to Succeed at the Expense of Others in This World--And the Next,
By Mrs. Betty Bowers, America's Best Christian 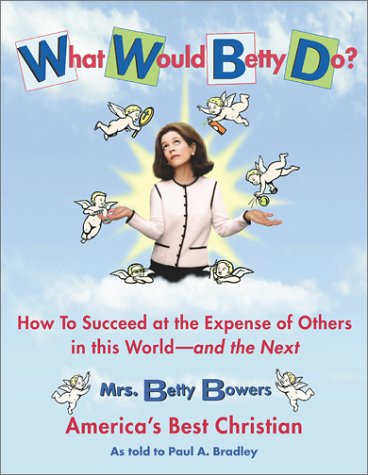 Be sure to visit Betty's home page  bettybowers.com

Back to In the Kitchen with Bartcop and Friends